About the LDK Crew

Aaron is the author of the Psygens and Space Cats series, and the Onicranium Dragons series. Aaron is a certified Linux nerd who’s been a fan of both Star Trek and Star Wars as long as long as he can remember. Naturally he writes space-opera. He lives in rural Michigan with his wife, four kids, and at least two cats.
You can learn more about Aaron and his books at aarondemott.com 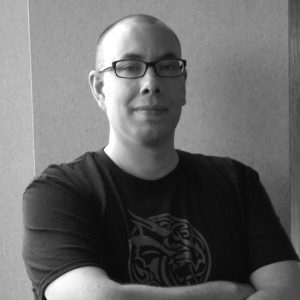 Josh is an avid reader, ecumenical nerd, and lover of puns. He lives in Minnesota with his wife and two high-energy children. He helps out – and cracks wise – at the men’s group at his church. When not living in worlds of others’ devising, Josh enjoys nighttime walks and board games. He’s currently hard at work on his first novel.

From her super-secret lair near Kansas City, Liberty Speidel imagines no-nonsense stories with heart-hitting appeal. Subsisting a little too heavily on Earl Grey tea and dark chocolate-covered almonds, she claims this helps her write the highly-acclaimed Darby Shaw Chronicles and upcoming Justice trilogy. Her husband and kids occasionally pull her away from the computer for camping and hiking trips with her beloved Labrador Retriever.

You can find out more about her at LibertySpeidel.com.