Mike Duran, author of The Ghost Box and Saint Death, novels in the Reagan Moon para-noir series, joins us in Episodes 27 & 28 this week. We had a blast talking to him. Sometimes funny, sometimes very serious, Mike is a former pastor and he definitely keeps us on our toes throughout both episodes.

As Christian writers…hope has to be a pretty big factor in our writing. ~Mike Duran

Mike shares about his unlikely background, which includes 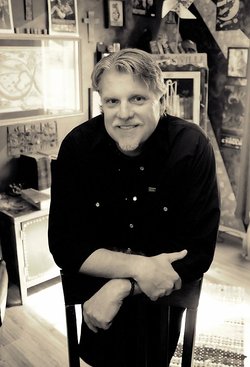 going from dabbling in the occult to being a pastor. We’re pretty sure it informs Reagan Moon’s stories, which are definitely fun reads, but they may not be for all our listeners. Mike describes Reagan in a bit of a…colorful…manner. 😉

We discuss paranormal stuff…and Mike suggests that a lot of that may exist more than people realize. You may or may not agree, but it’s still a fascinating discussion.

So, what you’re saying is that life is a little more like Hot Topic than we want to admit? ~Aaron DeMott

Why Los Angeles needed to be the setting for the Reagan Moon books…I think when you hear his reasoning, it’ll make perfect sense.

The background for Saint Death is really a fascinating discussion, and some of it has been in the news in the last few months (I vaguely remember hearing about it.) Mike describes a research trip he and his wife did in the process of writing this book. It’s interesting, to say the least.

Mike’s answer to our superhero question raises a few eyebrows. But given his background, it makes perfect sense.

Gremlins! (And not the movie!) The true origins of ghost boxes (who knew?)! Some moderately gross stuff (that may make some of our listeners squeamish!)

Mike’s “what’s up next” is definitely something to look forward to if you’re a writer interested in horror and/or writing from a faith perspective and what the parameters are for that.

In Episode 28, Stand On Your Head:

Our Plotting vs Pantsing question sends us down a hilarious rabbit trail, before Mike helps us get back on track. Then he talks about his own paranoia as a writer. Mike shares how he figures out what book to write next.

We discuss the learning curve of Scrivener, but also the benefits, too. (Hint: we all use Scrivener and LOVE it.)

Mike compares the editing process to a visit to a dentist, and while it’s a gross comparison in a way, it has a lot of merit. Had us in stitches! 🙂

Writer’s block, or the lack thereof. Mike’s solutions for feeling inspirationally dry are tremendously helpful (and is a technique I’ve used myself!) Mike starts waxing philosophical about writer’s inspirational…and it gets deep (in a good way.)

Mike recommends not eating or drinking during writing, and also uses a standing desk. He believes he writes better when he’s standing.

What characteristic does Mike share with his son? (Hint: it kind of grosses Aaron out!) And yeah, we went there. Mike compares his marketing practices to corpses about to be autopsied. (He’s kidding.)

Through giggles, we manage to get in some deep theological discussion. Which, if you’ve read Mike’s blog, shouldn’t surprise you at all. When we start discussing theology in tandem with physics and the reality of time, it gets deep. Truly a fascinating discussion.